Say Goodbye to the Status Quo for Automation

Over 700 participants attended the 20th Annual ARC Industry Forum in Orlando, representing 300 different companies and coming from more than 25 countries around the globe.  The keynote presentations all reflected the Forum theme, Industry in Transition: Navigating the New Age of Innovation, and served as a call to action for the automation industry.

Several common messages resonated throughout the initial keynotes.  These included the message that transformative innovation is no longer an option; companies that fail to innovate effectively to meet business challenges will simply cease to exist.  This applies to technology end users and technology suppliers alike.  As we learned, while automation technology has seen only incremental innovation in recent years, that’s about to change; quickly and quite dramatically.

We Can All Learn a Lot from Each Other

Andy Chatha kicked off his presentation by asking “first timers” to the Forum to raise their hands.  Quite a few people in the large, but packed general session room at the Renaissance SeaWorld hotel did so; far more than we’d typically expect.  Andy interpreted this as an indication of the increased interest in the topics covered at the Forum and curiosity about how owner-operators are approaching today’s potentially disruptive technologies.  “Clearly, we can all learn from each other,” he observed.  This point came up several times during the keynotes.

Next, he brought the audience’s attention to the news release issued just last month announcing that ExxonMobil has awarded Lockheed Martin - a leading aerospace company - a contract to help develop a next-generation automation system for refining and chemical facilities.  Andy also mentioned that the entire ExxonMobil team was at the Forum along with at least one key person from Lockheed Martin.

Andy mentioned that ARC agrees with ExxonMobil that the industry could certainly benefit from more open systems.  “But why Lockheed Martin?” he asked rhetorically.  “When you think about it, it really makes sense.  Like a process plant, an aircraft is very complicated (and just as mission-critical, we might add).  “Our industry can learn a lot from the aerospace industry.”

Significantly, ExxonMobil plans to share the new open architecture and resulting products with the rest of the industry as a commercially available solution.  Andy thanked ExxonMobil for starting this initiative toward open systems and encouraged all industry stakeholders, suppliers and end users alike, to participate.

Andy went on to explain that today’s proprietary systems do not provide a solid foundation for digital transformation.  While most plants are highly automated, the level of automation has not changed significantly in three decades. “We believe the process industries are ripe for digital transformation.  Most process plants are more than 20 years old.  Installed automation and other assets are increasingly expensive to maintain, failure-prone, inefficient, susceptible to cyber attacks, and expensive to upgrade.”

In conclusion, he made the following recommendations for owner-operators going forward:

Picking up where Andy left off, ExxonMobil’s Sandy Vasser explained that “Think Differently” is his upstream organization’s new mantra.  “This even applies for proven processes.  It’s no longer sufficient for us to just solve a problem; we must be able to solve in the most efficient manner possible.”

Recent challenges faced by ExxonMobil (and other many other owner-operators) include having to deal with multiple EPCs and fabrication yards located around the globe, equipment that is supplied from around the globe, and parallel activities to satisfy project schedules.  There is repetitive recycle of design right up until startup and extensive hardware changes throughout execution.  Many changes must be implemented in the field, when the cost of change is greatest.  Automation is always on the critical path and we experience execution and project uncertainty, longer schedules, and higher costs.   As a result, project costs are going up while project returns are getting lower (due in part to the current depressed prices for oil and gas).

“We’ve got to come up with a different approach, so we’re challenging everything we do,” Mr. Vasser said.

He went on to explain the problems related to custom engineering solutions.  “We want to eliminate customized solutions as much as possible.  We need standardization to eliminate a significant number of steps in a project.”  This includes eliminating redundant qualification testing, factory acceptance testing, and site acceptance testing.  “Things like smart I/O have also freed us from dependencies.”

Mr. Vasser concluded his presentation with a quote attributed to Albert Einstein:  We cannot solve our problems with the same thinking we used when we created them.

The next keynote was Don Bartusiak from ExxonMobil Research & Engineering.  “Andy asked me to share ExxonMobil’s downstream vision for an open architecture control system and our partnership with Lockheed Martin,” he said.  “I’d like to present the big picture here.  The problem we’re trying to solve is, ‘How can we take the cost out of our process control projects; particularly for greenfield operations?’  There’s a finite time window of opportunity to do so,” he explained.

“So what’s wrong with the status quo?” he asked rhetorically.  “In a nutshell, it’s too expensive for us to upgrade our process control systems and we’re just not getting enough value from them.  Most of the recent enhancements we’ve made were for level 3 applications that reside above the control systems.”  ARC has observed that ExxonMobil is not alone in this trend.  Mr. Bartusiak also noted that a significant percentage of ExxonMobil Refining and Chemical’s control systems will face obsolescence over the next decade, which ARC research indicates applies to many other companies as well.

To find solutions, ExxonMobil “looked outside our little world,” Bartusiak explained. “We saw opportunities for improvement through open architectures and virtualization; not just for engineering, but also to provide new ways for process control.  We saw a constructive revolution taking place in the defense avionics industry by transitioning from a proprietary ‘stovepipe’ model to fully open and interoperable, standards-based system architecture.  We saw IoT and wireless changing management expectations, with questions such as, ‘Why do we even need control systems anymore?’  And we’re seeing new solutions for the security challenge, with new security models emerging to enable more secure data flow between the operational technology layer and IT/cloud layers.”

Next, Bartusiak addressed the obvious question of why ExxonMobil decided to work with Lockheed Martin, a name rarely heard in the process control world, to supplement its internal resources for this critically important initiative.  He explained that when the company looked around, it found the work of the Open Group Future Airborne Capability Environment (FACE) Consortium very appealing.  Lockheed Martin is a founding member of this joint government-industry consortium.

Upon stepping up to the podium following Mr. Bartusiak’s presentation, Michael Carroll, VP of Innovation & Operations Excellence at Georgia-Pacific, commented, “If you’re not doing this in ten years, you won’t be doing anything.”  Mr. Carroll’s keynote addressed the key challenges to successful innovation.

According to Mr. Carroll, innovation requires both decision and your participation.  To illustrate this, he conveyed that half of his kindergarten classmates from his tiny (and apparently extremely depressed) Midwestern home town of Knockemstiff, Ohio, have already died; many due to poor decisions.  “We are a product of our past decisions.  Innovation requires you to both make a decision and participate,” he said.

“As humans, we create most of our own obstacles,” which includes losing the vibrant imaginations most of us had as youngsters.  “Never break the first law of imagination:  Don’t let what you know become the enemy of what you might learn.  Everything that you heard Andy and Don say here is right, but don’t let lack of imagination get in your way.  The problem is us; so what are we going to do about it?”  To avoid killing innovation dead in its tracks, Mr. Carroll recommended that we:

In summary, Carroll said, “Innovation in large organizations is really hard because it is going to affect everyone, possibly in an uncontrollable manner.”

Michael joined Georgia-Pacific in 2010 to focus his technological and entrepreneurial talents on innovation and leadership. Prior to that he and a partner formed McTech Group, a company focused on innovative products for the building products and construction industry. In addition to his Executive Vice President responsibilities, Michael formed a Joint Venture designed to sell consumer “DIY” products to big box retailers like Wal-Mart, Home Depot, and Lowe’s. Previous positions include Director of Operations at Riverwood International, CEO of North and South American Operations at Shepherd, and Principal Change Agent at Mead Paper.

Sandy has been with Exxon or ExxonMobil for over 35 years and has been involved in a number of Upstream projects covering offshore facilities, onshore facilities, and cogeneration facilities. He currently manages a team of about 120 electrical and I&C professionals responsible for the design, installation, and commissioning of electrical generation and distribution systems, process control systems, and safety instrumented systems for all major ExxonMobil Upstream capital projects. This team is also responsible for developing, promoting and implementing strategies, practices, processes, and tools for successfully executing project automation and electrical activities.

Don is responsible for setting technology strategy for instrumentation, process analytics, control systems, and applications for ExxonMobil, including interactions with other ExxonMobil companies regarding process control.  He assists line management with career development of about 900 process control staff globally.  He has 25 years of experience in ExxonMobil as an individual contributor (real-time artificial intelligence, regulatory control, real-time optimization, and non-linear model predictive control) and in management positions.  He has authored 4 patents and 9 articles.  Don will discuss ExxonMobil's vision for next-generation of open & secure automation systems (see a portion of the press release below).

SPRING, TX – Jan. 14, 2016 — ExxonMobil Research and Engineering Company (EMRE) has awarded Lockheed Martin a contract to serve as the systems integrator in the early stage development of a next-generation open and secure automation system for process industries. Lockheed Martin will be responsible for the advanced processing architecture working with EMRE in this pre-development phase. As part of this research phase, Lockheed Martin will be conducting an Industry Day on Jan. 26, 2016 and will solicit Requests for Information (RFIs) from industry in support of the new system...

Rob has overall responsibility to drive Watson Solutions technical strategy and thought leadership. He works collaboratively with the Watson engineering, research, and development teams across IBM. Prior to joining Watson Solutions, Rob was Chief Architect for the SOA Foundation and member of the IBM Academy of Technology. He championed an open industry architectural definition of the principles of business and IT alignment enabled by SOA and business process optimization, as well as ensuring IBM's software and services portfolio is architecturally grounded to enable for efficient SOA-based solutions. Rob has 37 years of programming experience and has worked with distributed, object-oriented, component-based transaction monitors for the last 26 years.

New industry solutions are on display at the Innovations Showcase.  The Showcase provides an excellent opportunity for executives to assess the potential for emerging applications in production management, interoperability, virtual manufacturing, process improvement, asset management, operations management, supply chain synchronization, and more.  Exhibits have application scenarios for attendees to see how emerging technologies are applied to help solve issues across all industries.

The Showcase is open during the Monday Evening Reception and during breakfasts, breaks, and lunches.  It is held adjacent to the forum where refreshments are served. 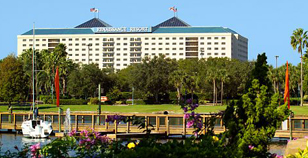 The Forum is held at the Renaissance Orlando Hotel in Orlando, Florida.

The Renaissance is just a short shuttle or taxi ride from the most popular Orlando attractions and within easy access of Orlando airports. Hotel amenities include complimentary 24 hour fitness center use; transportation to SeaWorld Orlando, Discovery Cove, Aquatica, and Universal Studios Orlando based on shuttle schedule; and public area wireless Internet.