Force Sensors market research study delivers current market analysis plus a five year market and technology forecast. The study is available in multiple editions including worldwide and all regions.

The market for force sensors hosts a variety of different companies and is characterized by strong competition as well as the potential to differentiate with technological features.  The force sensors market is expected to show moderate growth in the forecast period.  Growth in Asia and Europe has balanced the marginal contraction in North America, which led to the overall growth in 2016.

A strong driver for more sensors is the emerging Industrial Internet of Things (IIoT), which requires sensor-based measurements for analysis and decision support purposes.
Almost 70 percent of force sensors are sold to OEMs.  For that reason, ARC now segments these OEM revenues into 22 different machinery types to present a clearer picture of the OEM market.

Automotive is the most important end user industry for force sensors followed by the machinery and pharmaceutical & biotech industries.  Investments will continue in all three industries, but ARC expects to see especially strong investments in automotive in 2017.

Regarding the business cycle, ARC expects a rather sound development during the forecast period, despite political crises and currency fluctuation in the world economy. 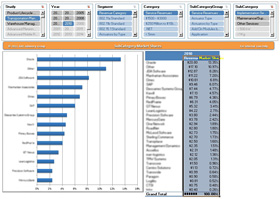 OEMs often stick with their current suppliers.  In Asia, price still plays an important role, while in Europe, reliability and increasingly embedded intelligence are important buying criteria.  This research will help new suppliers enter the market and existing suppliers grow their businesses, answering key questions such as:

This market study may be purchased as an Excel Workbook and/or as a PDF File (with or without charts).  The Workbook has some unique features such as the ability to view data in local currency.  Regional studies include country and industry market data.  Country studies include market trends and industry data.  Studies and formats available are listed below:

Please contact us for the countries available for this study.