The SCADA Systems for Electric Power Industry market research study delivers current market analysis plus a five year market and technology forecast. The study is available in multiple editions including worldwide, all regions, and most major countries

The SCADA for electric power market, including hardware, software, and services, is managing electric power systems that are seeing disruptive changes in the generation sector.  New renewable generation is a significant part of the electric power growth in Asia, while coal plants remain in operation. However, in developed countries, new renewable generation and natural gas power is expanding, while coal generation is in sharp decline.  Nuclear power dipped sharply in 2011 after Fukushima and has seen a slight worldwide increase in the past few years as new nuclear power plants came online and slightly exceeded retiring plants.  In many countries, rooftop solar and private ownership of solar, wind, and energy storage has increased.  These assets are not directly controlled by utilities, but they have a big impact on grid operations and require monitoring and control by T&D SCADA systems.

The software applications used in T&D SCADA systems can be built by utilities, SCADA suppliers, or by third party software and service suppliers.  These applications are increasingly important for stable grid operation(s).  New applications and decision support packages such as ADMS, DERMS, OMS, and EMS are driving customer value and growth. 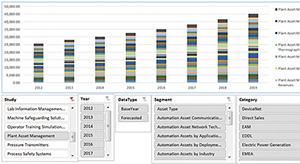 Electric Grid in China and Other Asian Countries Is Growing Strongly

COVID-19 is impacting the architecture of T&D SCADA networks as more remote workstation access is needed by engineers, operations, and maintenance staff that no longer have direct access to operational control rooms.  The SCADA Systems for Electric Power report provides unique insights into the impacts of COVID-19 on the market.

All energy systems will require the utility industry to make near carbon-free electric power before transportation, buildings, and industries can transition away from fossil fuels and use clean electric power, as the world is starting to recognize the importance of decarbonization. The report discusses the complex interplay of economics, utility regulations, and technology that are impacting the future of the electric grid.

With so much new non-dispatchable solar and wind power and the massive expansion of lithium battery production, there are new obstacles and opportunities to ensure a stable electric grid that can meet an increasingly complex load profile.  New software applications such as ADMS, DERMS, OMS, and EMS are helping utilities make the best use of assets and helping this segment avoid costly and unnecessary new peaking power plants and associated transmission upgrades.

Existing T&D SCADA systems rely on analog devices and older protocols like ModBus and DNP3.  However, new digital substation communications, like the IEC 61850 protocol that connects directly to new IED’s (Intelligent Electronic Devices), are making their way into operations centers.  The data collected from many private generation and storage systems need to be aggregated for SCADA monitoring. Of course, all this new data communication requires cybersecurity considerations.

The research identifies all relevant suppliers serving the market.

List of countries & currencies included in each region: MIRA-Country

Contact us for the countries available for this study.